What Damage Will Your Next Cigarette Do? 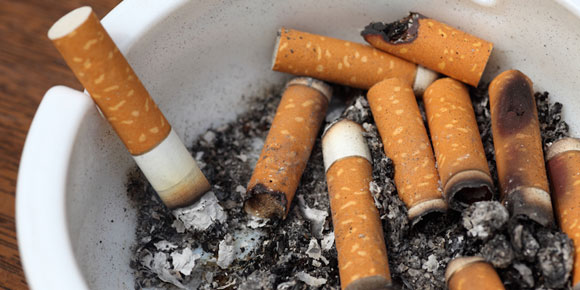 Every year on May 31, WHO and partners mark “World No Tobacco Day” highlighting the health and additional risks associated with tobacco use, and advocating for effective policies to reduce tobacco consumption.

The theme for World No Tobacco Day 2017 is “Tobacco – a threat to development.” Campaigns will demonstrate the threats that the tobacco industry poses to the sustainable development of all countries, including the health and economic well being of their citizens. It will propose measures that governments and the public should take to promote health and development by confronting the global tobacco crisis.

In Indonesia, a 2017 campaign asks “What Damage Will Your Next Cigarette Do,” which encourages people to think about the life-threatening consequences of tobacco before they pick up their next cigarette.

The campaign was launched by Dr. Anung Sugihantono, Director General of the Ministry of Health. “When someone reaches for a cigarette, it is likely that all they are thinking about is taking a quick break from their day though they are not likely thinking about lung cancer, Buerger’s disease, stroke or throat cancer,” said Dr. Sugihantono.

Currently, over 2,667,000 children and 53,767,000 adults use tobacco in Indonesia. And hard-hitting campaigns according to Dr. Sugihantono are crucial to preventing the early and unnecessary deaths of over 200,000 Indonesians every single year.

Goals of the World No Tobacco Day 2017 campaign

Tobacco control supports health and development
WHO is calling on countries to prioritize and accelerate tobacco control efforts as part of their responses to the 2030 Agenda for Sustainable Development.

All countries benefit from successfully controlling the tobacco epidemic, above all by protecting their citizens from the harms of tobacco use and reducing its economic toll on national economies. The aim of the Sustainable Development Agenda, and its 17 global goals, is to ensure that “no one is left behind.”

Tobacco control has been enshrined in the Sustainable Development Agenda. It is seen as one of the most effective means to help achieve SDG target 3.4 of a one-third reduction globally, by 2030, of premature deaths from noncommunicable diseases (NCDs), including cardiovascular disease, cancers and chronic obstructed pulmonary disease. Strengthening implementation of the WHO Framework Convention on Tobacco in all countries is an additional target to be met by governments developing national sustainable development responses.