Rabies Then and Now 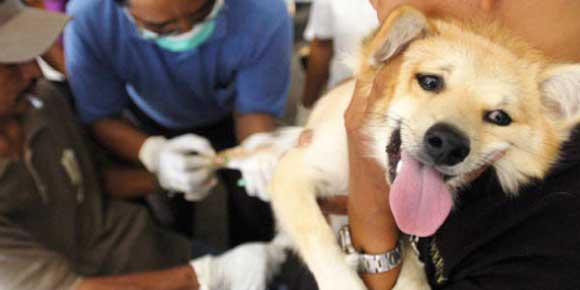 In 2011 the Balinese government made a significant effort to curb the spread of rabies through vaccinations and culling however the 500,000 dogs on the island at the time presented enormous challenges they weren’t prepared for. A total of 55 patients were treated, 30 of them succumbing to the fatal virus while 25 tested positive for rabies. Evidence shows that once a patient has symptoms of the disease they will almost certainly die without swift post-exposure prophylaxis (PEP).

The first case of rabies surfaced in Bali in 2008, however it didn’t take long before numerous cases began swamping local hospitals seeking anti-rabies vaccination. To date over 160 people have died in Bali from the disease with the province having the highest incidence of rabies in Indonesia. Just last year Bali recorded 539 cases of rabies claiming at least 15 lives, the worst outbreak since 2011.

The Bali recently government launched a fresh program to vaccinate some 400,000 dogs in an effort to control and eventually completely eradicate rabies.Today vaccinated dogs are marked with a special collar to ease identification by a special team of dog catchers and vaccinators.

According to I Ketut Diarmita, animal health director at the Agriculture Ministry, the current program will run more efficiently than in previous years as coordination has been improved among stakeholders such as the pilot project, Dog Population Management (DPM).

The government has also recently centralized a command and control post, known as Posko Rabies, used largely as an information-sharing center. “The central government has mobilized various resources to ensure successful rabies vaccination in 2016, including support from the Food and Agriculture Organization of the United Nations (FAO) and World Organization for Animal Health (OIE),” says Diarmita.

Rabies is present on all continents with the exception of Antarctica, but more than 95% of human deaths occur in Asia and Africa.Worldwide around 59,000 people die every year from rabies and each year more than 15 million people worldwide receive PEP.

The answer according to experts is simply controlling the disease in dogs and
Indonesia is not alone in the need to ramp up such efforts; Thailand, as one regional example,has been unsuccessful handling rabies because the country still can’t quell the diseasein its canine population.“Rabies is close to 100 percent fatal, but it is also almost 100 percent preventable, and the best, most cost-effective way of preventing canine rabies is by vaccinating dogs,” says Kevin Doran, a spokesman for Global Alliance for Rabies Control (GARC).

Rabies is a slow, clever, determined disease. As it sets in, sufferers experience an extreme fear of light and moving objects, of noise, water and wind. Convulsions, excessive saliva production and severe psychotic episodes follow. Dogs often embark on a biting rampage.From the viruses prospective, it’s trying to drive its host to be more aggressive so they bite somebody else and spread more viruses.

Rabies Fact Sheet (provided by the WHO)
Prevention
Eliminating rabies in dogs
Rabies is a vaccine-preventable disease. Vaccinating dogs is the most cost-effective strategy for preventing rabies in people. Dog vaccination will drive down not only the deaths attributable to rabies but also the need for PEP as a part of dog bite patient care.

Preventive immunization in people
The same safe and effective vaccines can be used for pre-exposure immunization. This is recommended for travellers spending a lot of time outdoors, especially in rural areas, involved in activities such as bicycling, camping, or hiking as well as for long-term travellers and expatriates living in areas with a significant risk of exposure to dog bites.

Pre-exposure immunization is also recommended for people in certain high-risk occupations such as laboratory workers dealing with live rabies virus and other rabies-related viruses (lyssa viruses), and people involved in any activities that might bring them professionally or otherwise into direct contact with bats, carnivores, and other mammals in rabies-affected areas. As children are considered at higher risk because they tend to play with animals, may receive more severe bites, or may not report bites, their immunization could be considered if living in or visiting high-risk areas.

Symptoms
The incubation period for rabies is typically 1–3 months, but may vary from one week to one 1 year, dependent upon factors such as location of rabies entry and rabies viral load. The initial symptoms of rabies are fever and often pain or an unusual or unexplained tingling, pricking or burning sensation (paraesthesia) at the wound site. As the virus spreads through the central nervous system, progressive, fatal inflammation of the brain and spinal cord develops.

Two forms of the disease can follow. People with furious rabies exhibit signs of hyperactivity, excited behavior, hydrophobia (fear of water) and sometimes aerophobia (fear of flying). After a few days, death occurs by cardiorespiratory arrest.

Paralytic rabies accounts for about 30% of the total number of human cases. This form of rabies runs a less dramatic and usually longer course than the furious form. The muscles gradually become paralyzed, starting at the site of the bite or scratch. A coma slowly develops, and eventually death occurs. The paralytic form of rabies is often misdiagnosed, contributing to the under-reporting of the disease.

Diagnosis
No tests are available to diagnose rabies infection in humans before the onset of clinical disease, and unless the rabies-specific signs of hydrophobia or aerophobia are present, the clinical diagnosis may be difficult. Human rabies can be confirmed intra-vitam and post mortem by various diagnostic techniques aimed at detecting whole virus, viral antigens or nucleic acids in infected tissues (brain, skin, urine or saliva).

Transmission
People are usually infected following a deep bite or scratch by an infected animal. Dogs are the main host and transmitter of rabies. They are the cause of human rabies deaths in Asia and Africa in more than 95% of all cases. Bats are the source of most human rabies deaths in the Americas. Bat rabies has also recently emerged as a public health threat in Australia and Western Europe. Human deaths following exposure to foxes, raccoons, skunks, jackals, mongooses and other wild carnivore host species are very rare.

Transmission can also occur when infectious material – usually saliva – comes into direct contact with human mucosa or fresh skin wounds. Human-to-human transmission by bite is theoretically possible but has never been confirmed.
Rarely, rabies may be contracted by inhalation of virus-containing aerosol or via transplantation of an infected organ. Ingestion of raw meat or other tissues from animals infected with rabies is not a confirmed source of human infection.

Post-exposure prophylaxis (PEP)
Post-exposure prophylaxis (PEP) means the treatment of a bite victim that is started immediately after exposure to rabies in order to prevent rabies from entering the central nervous system which would result in imminent death. This consists of:
Local treatment of the wound, initiated as soon as possible after exposure;
A course of potent and effective rabies vaccine that meets WHO standards; and
the administration of rabies immunoglobulin (RIG), if indicated.
Effective treatment soon after exposure to rabies can prevent the onset of symptoms and death.

Local treatment of the wound
This involves first-aid of the wound that includes immediate and thorough flushing and washing of the wound for a minimum of 15 minutes with soap and water, detergent, povidone iodine or other substances that kill the rabies virus.