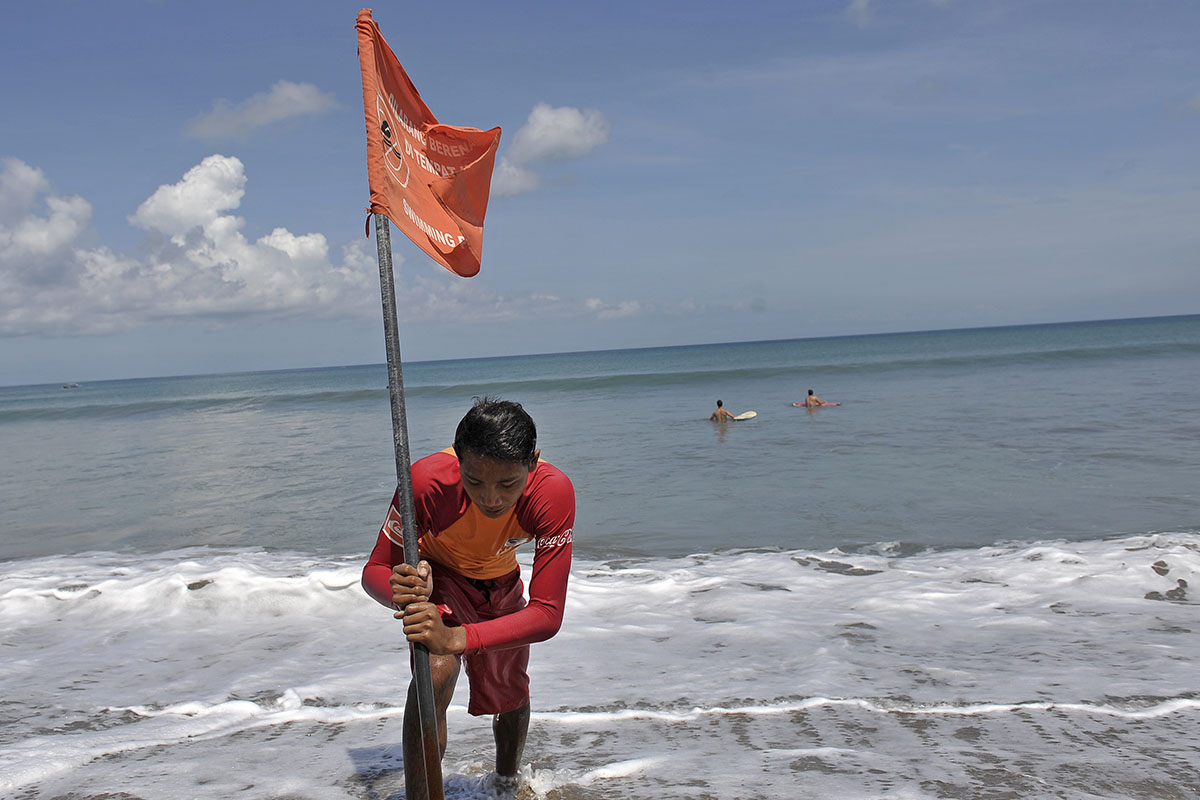 Bali’s beaches are famous for their surfing and their sheer beauty with hundreds of thousands of tourists arriving specifically to swim, body-board or surf along the island’s coastal fringe. Yet accidents happen often with visitors vulnerable to sunburn, treacherous undercurrents — even a small but very real risk of tsunamis.

Be mindful of local warnings
Pay attention to Bali beach guards such as Baliwista. It’s important for visitors to understand that the wind generates waves and the higher the wind, the stronger the waves as one can witness along the island’s southern shores, which can be unforgiving. Simple rule: when surf is up, it’s a sign that there are stronger currents and more frequent waves — both of which may be too much for the average swimmer and certainly for small and adventurous children. Watch for the red warning flags.

Alcohol and swimming or boating don’t mix
Many catastrophic injuries — including drowning — involve alcohol consumption. Even a few bottles of refreshing Bintang beer can impair your judgment, balance and coordination. The level of alcohol in a person’s body is higher when they’re not drinking plenty of water and they’re out in the sun — three factors that lead to dehydration.

Real drowning doesn’t look like what you see on TV
Drowning is the second most common cause of accidental death in children (just behind car accidents).

Go inside when you see lightning
When a storm rolls in, Bali beaches don’t often close and you may not be called in and told to get inside your hotel or villa accommodation. The shocking truth is lightning strikes on beaches are extremely common and it’s the third deadliest threat for sunbathers and swimmers every year.

Take plenty of breaks
Exhaustion, sunburn, hypothermia, heat stroke and more are all common problems when spending time at the beach by the water all day long. Set your watch and take a short break every hour. Go to the restroom, drink plenty of fresh water, have a light snack, re-apply sunscreen, all of those are vital to being comfortable after a long day of sun, sand, and salt water.

Read the tsunami information in your hotel
Tsunamis are both deadly and unpredictable; these huge waves are triggered by underwater earthquakes and can reach the shore in mere minutes, leaving no time for the authorities to sound the alarm. This is especially true of Bali, where earthquake-prone zones lie very close to shore.