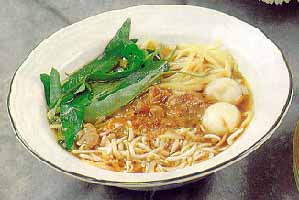 The widespread use of formalin, in preservation of fish, fruit and other food items is posing a threat to public health. The chemical used as a solution in water keeps fish fresh and makes fruits like mangoes attractive. This chemical, usually used to stop dead bodies from rotting, is now being used to preserve edible items.

Furthermore, BPOM also performed a simple experiment on the positive samples in attempt to remove the formalin content. These products were washed thoroughly and boiled in water with a temperature of 80°C for 5 to 10 minutes. The formalin level was reduced but not fully removed. So the conclusion, once formalin is added, it can not be removed.

What is formalin?
Formalin is a colourless strong-smelling chemical substance usually used in industry of textiles, plastics, papers, paint, construction, and well known to preserve human corpse. It is derived from formaldehyde gas dissolved in water.
Exposure from its gas or vapor can cause irritation to the eyes, nose and respiratory tract, causing sneezing, sore throat, larynx constriction, bronchitis and pneumonia. Multiple exposures can lead to asthma. It can also affect the skin, causing dermatitis or allergic reaction.
Serious inhalation or ingestion can cause severe pain with inflammation ulceration and necrosis of the mucous membranes, which line almost every internal organ. This may show as symptoms of nausea, vomiting blood, diarrhea with bloody stool, blood from the urine, acidosis, vertigo, and circulation failure, then death. 30mL is suggested the lethal dose of formalin. The limit allowed in air that is still safe for human is less than 2 ppm.

Formalin that was recently found in food, might not give such obvious reactions. However, this substance is known to be a carcinogenic substance, can precipitate cancer. A study showed mice exposed to formalin with concentration of 6 to 15 ppm for 2 years developed squamous-cell carcinoma in the nostril. Some other studies also show formalin will cause kidney, liver, and lung problems.

How to avoid food with formalin?