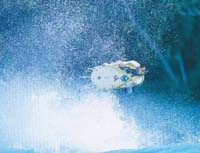 Although surfing is thought to be a relatively risk free sport, with an incidence between 3 – 4 injuries per 1000 days of surfing, we think it’s wise that you know what to expect and what to do before riding the waves.

Surfing is an ancient sport originally from Hawaii. There is written evidence as far back as 1500 AD of surfing rituals or in Hawaiian it is called “he’e nalu”. Since reaching California in the early 1900s, the popularity of surfing grew rapidly. Bali has also been a major attraction for surfers. Kuta, Uluwatu, Padang Padang, are just to name a few of the favorite surfing “hot spots” in Bali. BIMC Hospital, which is located less than 30 minutes away from these surf locations, receive surfing–related injuries on a daily basis, especially during the months of July and August.

Below listed are the most common injuries in surfing seen at BIMC Hospital.

Laceration
This is the most frequent type of injury. These injuries were mostly caused by the surfers own board, contact with another surfer’s board, or contact with the ocean floor.

Sprain, strain and dislocation
A sprain is an injury which occurs to ligaments caused by a sudden overstretching. The ligament is usually only stretched, but sometimes it can be snapped, slightly torn or ruptured, which are more serious and require a longer time to heal. While a strain is a similar injury which occurs to the muscles.
Dislocation is a term to describe a condition when bones at a joint moves from their normal position.
What to do?

Fracture
The most common fracture type for surfers are nose fractures. Usually this is due to contact with the surf board.

For fractures on the extremities, such as arms or legs:

Ear drum rupture
Perforation and rupture of the ear drum occurs occasionally, with an injury incidence of 5%. Although the eardrum would usually heal by itself, it is advised to see a doctor when you suspect you have this problem. If it is not managed properly the eardrum defect can be permanent and the middle ear will be easily infected causing chronic middle ear infections that can lead to serious complications, such as meningitis.

Safety equipments, such as nose guards, helmets, etc, are actually important to prevent these injuries. However, most surfers think these equipment and devices are “uncool” or would cause difficulties in surfing maneuvers. Consider them… it might save your life and your surfing days.

And one important thing is always follow the “unwritten rules of surfing”.