To Vape or Not to Vape 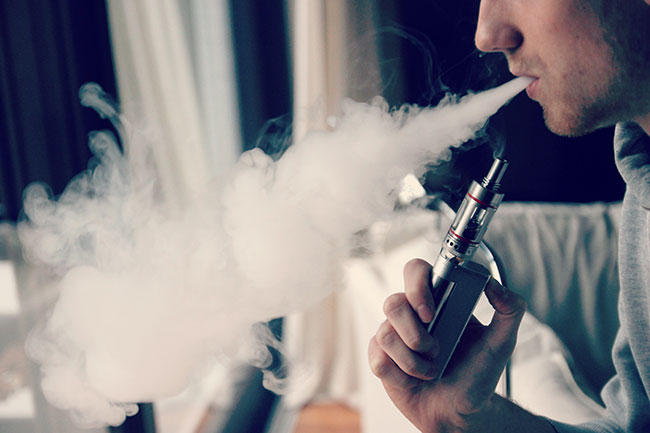 The 67 percent of Indonesian males and five percent of females over 15 years old trying to wean themselves off smoking tobacco have been provided controversial assistance with the advent of the electronic cigarette, those handheld devices that vaporize a flavored liquid usually made of nicotine, propylene glycol, glycerin and other chemical concentrations.

Invented in 2003 by Chinese pharmacist Hon Lik and since brought to the market in 2004, global use of “e-cigs” has risen exponentially and not for those who have never smoked but for those trying to quit thinking vapor is less dangerous than smoke. Still, the dangers according to health experts will become clearer as the population who vape ages. Recently the European Parliament passed regulations which came into effect in 2016, standardizing liquids and vaporizers, listing ingredients, as well as child-proofing liquid containers.

“Concerns do remain as to the long-term health impact of e-cigarettes and while there is no evidence to suggest that they pose anywhere near the same dangers as smoking, we must continue to monitor this area carefully,” said Penny Woods, Chief Executive of the British Lung Foundation.

In May 2016 the United States Food and Drug Administration (USFDA) announced it would extend its authority to include e-cigarettes and other tobacco products. And in August they began to apply and enforce key provisions of the Family Smoking Prevention and Tobacco Control Act as it relates to the sales, marketing and manufacturing of e-cigarettes.

In Indonesia there have been few commitments to curb cigarette consumption instead an apparent ban on e-cigarettes was announced in 2015. Poised to have the largest population of smokers in the world in the next decade, Indonesia currently ranks fourth on the list of countries with the most smokers, behind China, Russia and the US.

According to experts from O’Neill Institute for National and Global Health Law, Indonesia may have it backwards: “E-cigarettes should not divert policymakers attention away from implementing strong new measures to sharply reduce smoking and all the unnecessary death, disease, disability and economic costs caused by smoking.”

Vaper aficionados in the capital of Jakarta are quick to agree. The “Ministry of Vape Indonesia,” hardly a government department, but a fashionable online business set up to encourage vaping over smoking, was, according to its website “started by a group of ex-smokers who fell in love with vaping and because of vaping finally quit smoking.”

While their claim to have quit smoking due to vaping may hold some truth, whether they know it or not, they remain hooked on nicotine. According to the FDA, almost all e-cigarettes contain nicotine and while some products claim not to contain any nicotine they all do. Initial FDA lab tests conducted in 2009 found that cartridges labeled as nicotine-free had traceable levels of nicotine.

A 2014 study found little consistency in the amount of nicotine delivered by e-cigarettes of the same brand and strength. The FDA also reports that newer e-cigarette devices, especially “tank” styles, with higher voltage deliver a greater concentration of nicotine, which matters as the more nicotine used the greater the potential for addiction.

That hasn’t stopped the Ministry of Vape standing behind their products: “Now we run the biggest Vape store in Indonesia dedicated to spreading the cause of vaping and in providing this healthier alternative to Indonesian smokers,” it claims in its homepage. “All members of our staff are seasoned Vapers trained over time on the nuances of Vaping and in understanding customer needs.”

Don’t be fooled says the FDA. Smokers who wish to quit can learn more about ways that have been proven safe and effective in helping smokers quit at Lung.org/smoke-free.