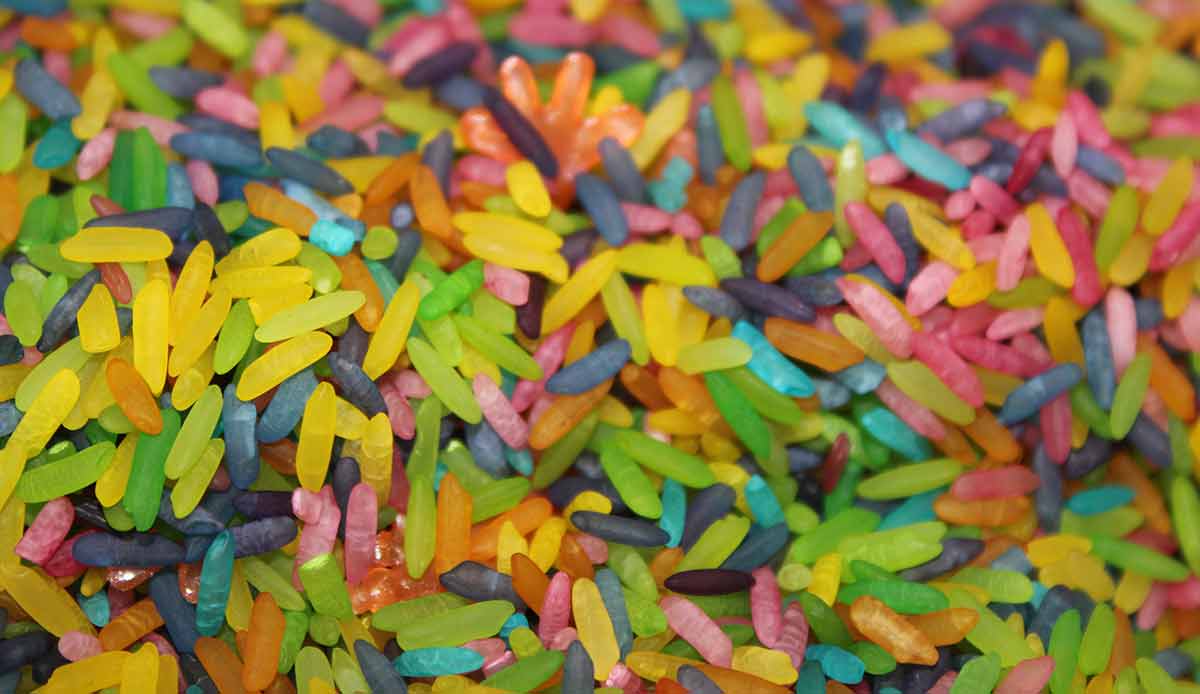 Everybody knows about brown rice, long judged to be healthier than white. What about all those other colors now offered in shops and restaurants? Can the color of your rice make you healthier?

One of the most beautiful sights in Bali are the terraced rice paddies, appearing as great green, curving steps following the contours of a mountainside. Much of that rice is in demand elsewhere, making Indonesia the second largest exporter in the world, behind Thailand.

Rice has three edible parts—the bran, the germ and the endosperm—the same as all other whole grains. Most of us think of “brown rice” as being synonymous with whole grain rice, but in fact whole grain rice can be many different colors, depending on the variety. Most rice varieties look similarly white once they’re milled to remove the bran and germ—but trace them back to their origins, and you’ll see a vibrant range of tints.

So what do these varieties have to offer? In a single word: antioxidants. As the name implies, antioxidants are substances that are capable of counteracting the damaging, but normal, effects of the physiological process of oxidation in animal tissue. Antioxidants are nutrients (vitamins and minerals) as well as enzymes (proteins in your body that assist in chemical reactions). They are believed to play a role in preventing the development of such chronic diseases as cancer, heart disease, stroke, Alzheimer’s disease, rheumatoid arthritis and cataracts.

In Indonesia, usually the most available are black (sometimes called purple), red and of course, brown.

sometimes called “forbidden rice” from its origin in China where it once was said to be served only to the emperors, is a glutinous (sticky) grain high in nutritional value, as well as a source of iron and Vitamin E. It also has a similar amount of fiber to brown rice and, like brown rice, has a mild, nutty taste. It usually turns deep purple or vermillion when cooked.

High in fiber, black rice makes a great porridge, and is used in other sweet dishes. Popular in Indonesia (and Thailand), it is not generally used as the main starch in a meal. Some restaurants in Bali offer black rice pudding as a special breakfast treat, but you may have to order it a day in advance. Scented with coconut, sweetened with palm sugar, optionally sprinkled with chopped fruit and a sprinkle of seeds

usually is eaten on special occasions in Thailand and Sri Lanka as well as in Indonesia. It is treasured for its pleasing texture, nutty flavor, and many health benefits.  High in fiber, a source of B vitamins, iron, calcium, potassium and magnesium, this versatile whole grain makes a great salad, a healthy side dish, or a colorful rice bowl. Even on everyday occasions.

like its flashier cousins, has a mild, nutty flavor and is chewier and more nutritious than white rice. Long-grain, short-grain and glutinous varieties.

Most of the white rice sold in markets and served in restaurants has been “enriched” in an effort to put some of this back.