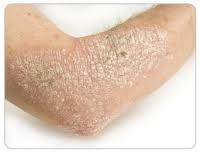 Psoriasis is a skin condition where the skin has hyperactive growth resulting in thick, white, silvery, or red patches of skin.  Normally the skin grows layer by layer and by time the outer layer will flake off.  This turnover time, the time when the inner layer becomes the outer layer, is around 4 weeks, but in psoriasis the turnover time is within days.

The cause of psoriasis is due to faulty signals the immune system sends, which stimulates the skin cell growth.  Since it triggered by one’s own immunity it is called an autoimmune disease.  Approximately 2-3% of the population worldwide is affected by psoriasis.  Most of them develop under 30 years of age.

It is not contagious and will become a chronic condition.  It is slightly more common in women than men and usually there is a family history with the same disease.

The symptoms of psoriasis can appear suddenly or slowly.  In many cases, psoriasis goes away and then flares up again repeatedly over time.

The typical symptom is patchy red skin which can be itchy, scaling, raised and thick.  The redness is most often seen on the elbows, knees, and trunk, but it can appear anywhere on the body, for example, there may be flaky patches on the scalp.

Other symptoms may include: genital sores in males, joint pain or aching, severe dandruff on the scalp and nail changes becoming thick, having yellow-brown spots, dents on the surface and separation of the nail from the base.

There is a remission time, when the symptoms are mild, but occasionally can develop flare ups triggered by physical or emotional stress.

Most of the time, the diagnosis is based on the skin appearance and other symptoms.  Sometimes, your doctor would ask for a skin biopsy, taking a small part of the affected skin to examine under the microscope.

Until now, scientists are figuring how autoimmunity works and no specific treatment is yet available to treat the main cause.  However, many options are available.  The target of treatment is to control and relieve the symptoms and prevent complications, i.e. infections.  There are three mains of therapy:

(1) Topical medications, such as lotion, ointment, cream, shampoo.  These will help relieve symptoms on the skin and moisten the dry skin.

(2) Systemic medications, such as pills or injections which will affect the whole body.  Your doctor may give antihistamines to relieve itchiness and sometimes steroids.  The later is prescribed to depress the immune system in hope it will reduce the hyperactive skin growth.

(3) Phototherapy, which is exposing the affected skin to ultraviolet light.  Some studies shows benefit of regular sun exposure, as long as you don’t get sun burnt.

Keeping the skin clean and moist and avoiding your specific psoriasis triggers may help reduce the number of flare-ups.  Daily baths or showers are recommended.  Avoid scrubbing too hard, because this can irritate the skin and trigger an attack.

Discuss your skin condition with our Dermatologist. Call BIMC Hospital 0361-761263 for an appointment.