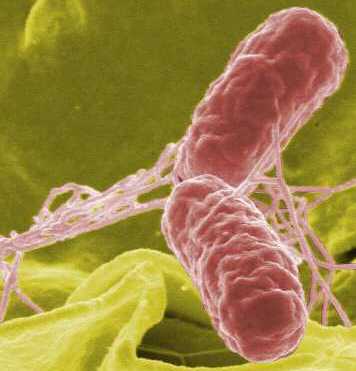 Typhoid fever or Enteric fever is a systemic acute illness associated with fever and digestive problems that is most often caused by the Salmonella typhi bacteria. Typhoid fever is contracted by the ingestion of the bacteria in contaminated food or water. The bacterium multiplies in the gallbladder, bile ducts, or liver and passes into the bowel. The bacteria can survive for weeks in water or dried sewage. The incubation period for S. typhi averages 10–14 days but ranges from 3–21 days, depending on the immune status and host’s health.

What are some of the symptoms?

After the incubation period, the symptoms will develop. Early symptoms include fever, general malaise, and abdominal pain. High fever (typically over 103°F) and severe diarrhea or constipation occurs as the disease gets worse. Some people with typhoid fever develop a rash called “rose spots”, which are small red spots on the stomach and chest. Usually the rash occurs at the end of the first week and resolves without a trace after 2–5 days. Other symptoms that occur include coated tongue, enlargement of liver and spleen, bloody nose /stool, and a reduced heart rate (bradycardia) at the peak of high fever. The patient may also have agitation, chills, confusion, difficulty paying attention, fluctuating moods, hallucinations, and severe fatigue. Perforation or bleeding of the digestive system commonly occurs in the third and fourth weeks of illness as part of complication in the late stage.

How is a diagnosis formulated?

Physicians usually make a working diagnosis based on medical history, physical examination, and laboratory findings. Since the clinical presentation is relatively nonspecific, the diagnosis needs to be considered in any febrile traveler returning from a developing region.

In the laboratory test result, an increase in white blood cell count is more common among children, during the first ten days of illness, and in cases complicated by intestinal perforation or secondary infection. Other non-specific laboratory findings include moderately elevated liver function tests and muscle enzyme levels. The definitive diagnosis requires the isolation bacteria from blood, bone marrow, rose spots, stool, or intestinal secretions. Other than that, we could also detect typhoid from serologic test.

The “Widal test” was the mainstay of typhoid fever diagnosis for decades. Neither sensitive nor specific, the Widal test is no longer an acceptable clinical method. Testing for immunoglobulin M (IgM) and IgG antibodies to S typhi is promising, but the success rates of these tests vary greatly in medical literature. This test (also called TUBEX) is the easiest recommended test and it can be checked early since the initial onset of fever but doctors usually prefer to wait until 4-6 days for more specific and sensitive results.

There is a cure

If it is confirmed that you have typhoid, a doctor will prescribe you with antibiotics and other symptomatic medications. Doctors will choose the type of antibiotics based on where you got the illness, how severe it is, and availability of the medication. The antibiotic is usually taken for five days until two weeks, depending on your clinical condition and the antibiotic used. It can be given orally or intravenously depending on the severity of the illness.

The commonly prescribed antibiotics are Cefixime, Ceftriaxone, Cefotaxime, Ciprofloxacin, Amoxicillin, Ttrimethoprim-sulfamethoxazole, Azithromycin or Chloramphenicol. You may also need antipyretic and anti-vomiting as symptomatic medications. Patients with uncomplicated infection can be managed at home with oral medications. If there is any condition like persistent vomiting, diarrhea, and/or abdominal pain, the patient should be hospitalized and be given supportive therapy as well as intravenous antibiotics, depending on the susceptibility profile.

Up to 10 % of untreated patients with typhoid fever excrete S. typhi in the feces for up to three months, and 1 – 4% of patients develop chronic asymptomatic carriage, shedding S. typhi in either urine or stool for more than a year. With appropriate antibiotic therapy, there is usually improvement within one to two days and recovery within seven to ten days.

You should eat foods that have been thoroughly cooked. Avoid raw vegetables and fruits that cannot be peeled. Avoid foods and beverages from street vendors. It is difficult for food to be kept clean on the street, and many travelers get sick from food bought from street vendors. Travelers to developing countries should be advised to monitor their food and water intake carefully and to consider vaccination.

These vaccines are not required for international travel, but it is recommended for travelers to areas where there is a moderate to high risk of exposure to S. typhi, especially those who are traveling to Southeast Asia and other developing regions of Asia, Africa, the Caribbean, and Central and South Americas, and who will be exposed to potentially contaminated food and liquids. Typhoid vaccine should be considered even for short periods of travel (less than two weeks) to high-risk areas.