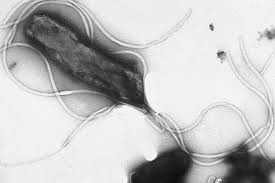 Helicobacter pylori, also known as H. pylori, are a bacterium that is commonly found in the stomach. It is present in approximately one-half of the world’s population.

H. pylori are probably spread by consuming food or water contaminated with fecal matter. H. pylori cause changes to the stomach and duodenum, the first part of the small intestine.  The bacteria invade the protective tissue that lines the stomach. This leads to the release of certain enzymes and toxins. These enzymes and toxins may directly or indirectly injure the cells of the stomach or duodenum.

As a result of these changes, the stomach and duodenum are more vulnerable to damage from digestive juices, such as stomach acid. This causes chronic inflammation in the walls of the stomach (gastritis) or duodenum (duodenitis).

Less commonly, a chronic condition of stomach inflammation or chronic gastritis causes abnormal changes in the stomach lining, which can lead to certain forms of cancer. It is uncommon to develop cancer as a result of H. pylori infection. Nevertheless, because so many people in the world are infected with H. pylori, it is considered to be an important cause of stomach cancer. People who live in countries in which H. pylori infection occurs at an early age are at greatest risk of stomach cancer.

Most people with H. pylori infection will never have any signs or symptoms. About 3 in 20 people

When to see a doctor

Tests and procedures used to determine whether you have an H. pylori infection include:

If you do not have symptoms — H. pylori testing is usually not recommended if you have no symptoms and no past history of peptic ulcer disease. However, it may be considered for selected people, such as those with a family history or concern about stomach cancer.

H. pylori infections are usually treated with two varieties of antibiotics at once, to help prevent the bacteria from developing a resistance to one particular antibiotic. Your doctor also will prescribe an acid suppression drug, to help your stomach lining heal. Combination therapy clears H. pylori in up to 9 in 10 cases if it is taken correctly for the full course.

Your doctor may recommend that you undergo testing for H. pylori several weeks after your treatment. If the tests show the treatment was unsuccessful, you may undergo another round of treatment with a different combination of antibiotic medications.